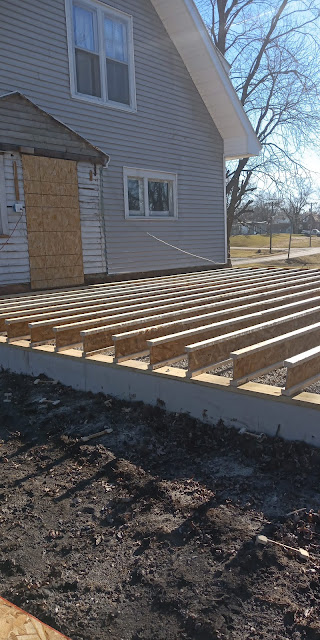 Time has just flown since my last update way back in September and there has been either no time or no inclination to edit pictures and write an update.  But things are really progressing right now and I wanted to catch up so we can continue to have this record of how the addition was built.

Though the foundation was completed by September,  it was December before our builder was free to start our project.  It was pretty exciting to see the floor, walls and roof going up. 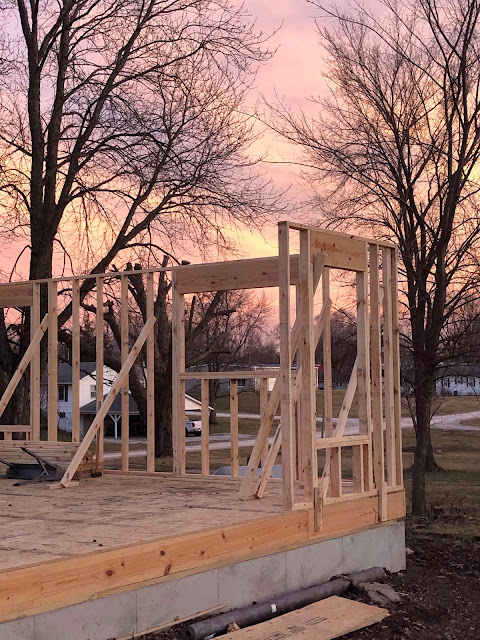 As part of the process, we needed to have the upper story west windows removed to make way for the roof of the addition.  One window was in DH’s office and one in the office closet.  The closet window was probably one of the oldest in the house, but unfortunately had rotted to the point of no return.  The office window had already been replaced once before.   DH was sorry to lose that natural light into his office but there just was no other option.  While we were at it, the office closet was also repaired and new Sheetrock installed, making it much neater looking. 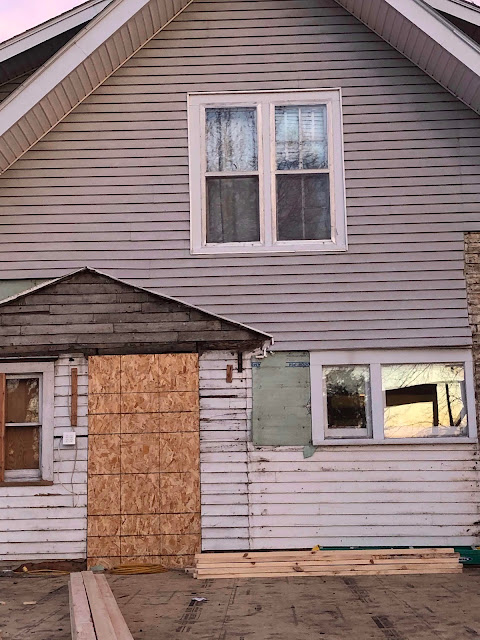 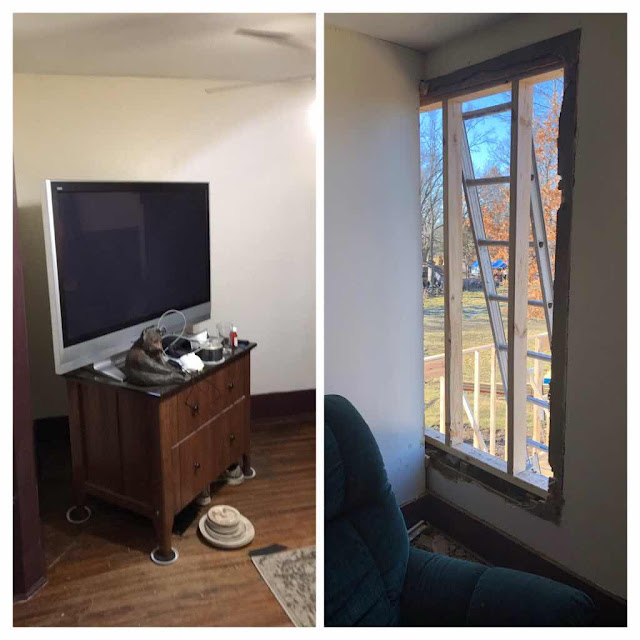 Completed wall on the left, wall minus window on the right 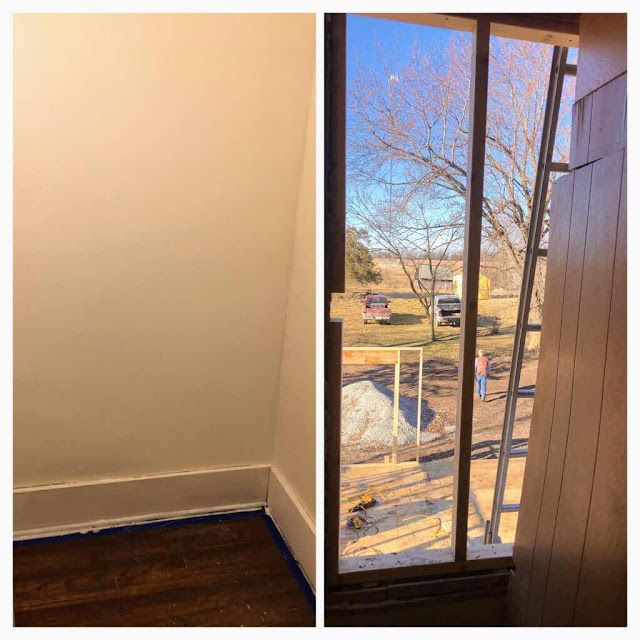 Completed closet on the left, closet with paneling minus window on the right.

This next picture shows the addition as of the first week of January.  As the builders were laying the roofing paper, we were getting freezing mist.  Work was stalled for the next two months as we got snow, ice, and sub freezing temperatures.  We looked out the dining room window a lot and dreamed of the day it would be all done. 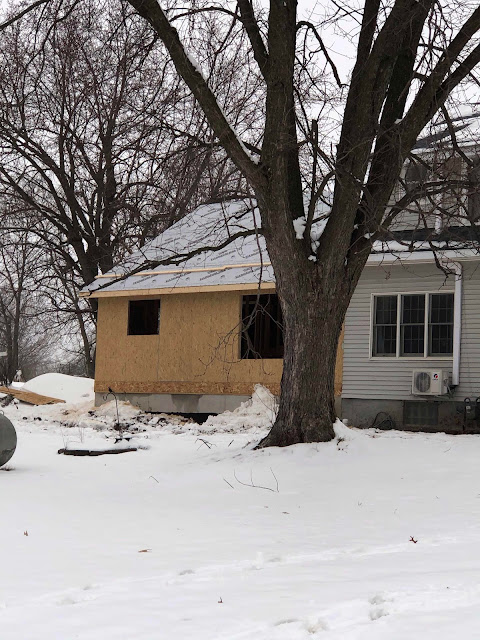 The weather finally let up  in late February and things really got moving in March.  In the space of just a few weeks, we got a roof, doors, windows, the electric and plumbing rough-ins, ductwork into the bathroom, master closet and laundry room (we will be using mini splits for the bedrooms the same as the upstairs rooms).  Last week, we got insulation and gutters and this week is all about Sheetrock.  As of today, all of the ceilings and most of the walls are done.  It looks like a house!! 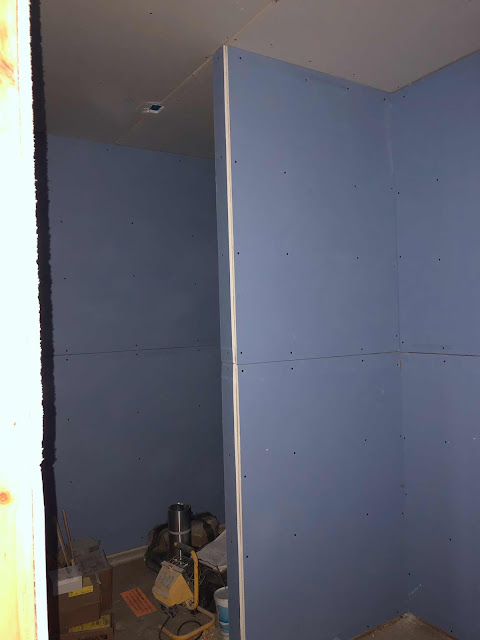 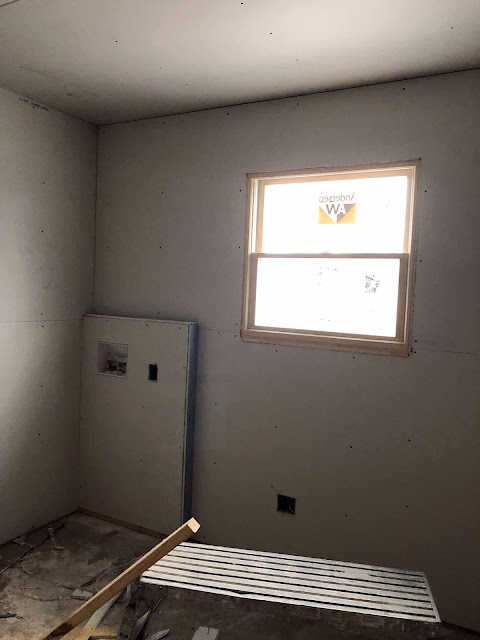 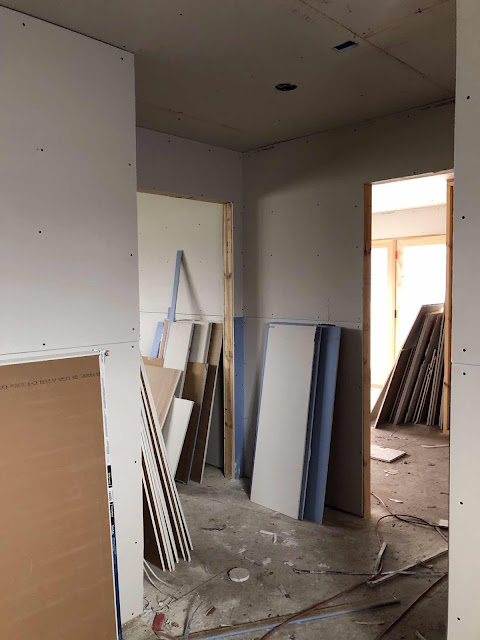 Hallway from laundry room into bedrooms and bathroom. 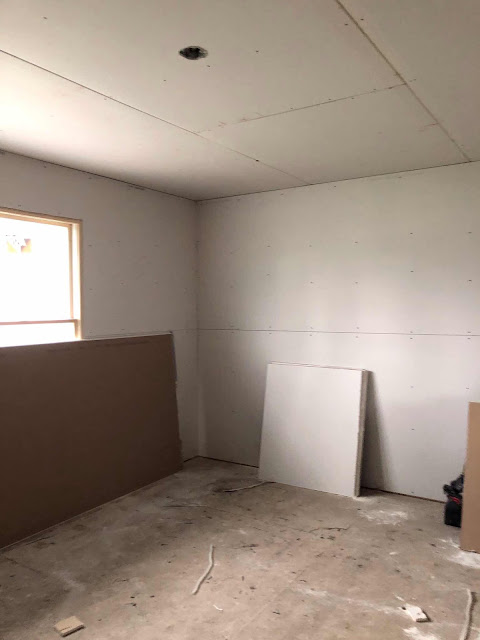 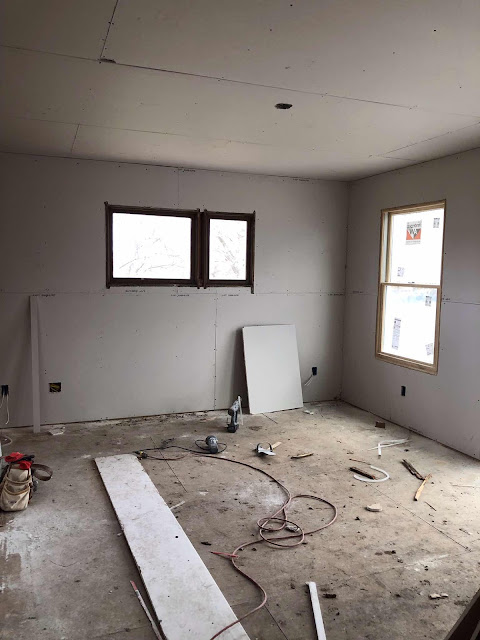 The long window to the left was the window from the dining room.  We wanted to save it keep as much of the original house in use as possible.  Unfortunately, when the builder took it out of the wall, he discovered that the smaller window on the left was in poor shape and couldn’t be saved.  We had two choices:  he could save the remaining windows even though they would be odd sizes or order a new window which might take several weeks to arrive.  We decided to keep to the original plan and keep the window.  It might look odd to someone else, but it is part of the history of the house and I love it.

One thing that we discovered after the builder removed two layers of siding from the house was that this window was not original to the house. 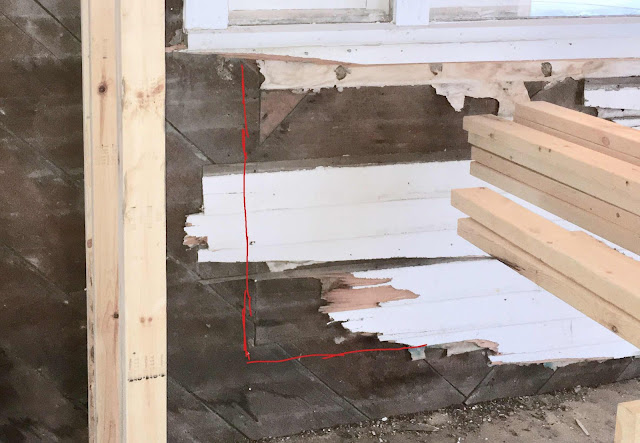 This is an edited picture of the wood under the window on the outside of the house. It looks to me that the original boards were diagonal (I am curious as to why).  I have outlined in red where it looks to me that someone filled in the bottom part of a taller, narrower window and installed this short, wide window in its place.  Since we know that the house got all new floors and new plumbing in 1922 based on the newspapers we found under the oak flooring, it is not out of line to think that the house was completely remodeled at that time.  Maybe it also got all new windows.  I have many more thoughts and theories on the history of the house, but I want to do more research before I write that post.

Most likely, by the time I can write the next post, the addition may well be finished and ready to furnish and occupy.  We are counting the days. 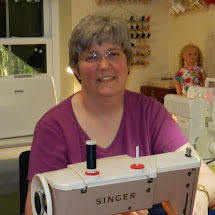 What keeps me going...

"I don't know what the future holds, but I do know that God holds the future." Marie Killilea, With Love from Karen

Blogs that inspire me